It has been a while! Last year has been pretty eventful ever since I obtained my EASA ME IR(H). Upon passing my skills test I spent a lot of time on just making sure my CV was finetuned to the tiniest detail and wrote loads of application letters to multiple companies. Then, after a lot of writing and follow up calls – I received a call back from a company in the UK that is in charge of most of the HEMS operations in the country. I seriously could not believe it and as soon as I had my interview and officially got hired to fly the AW169, I went straight into my Multicrew Cooperation Course at Oxford Aviation Academy, which was a requirement to be a First Officer on the AW169 in a multicrew HEMS environment. 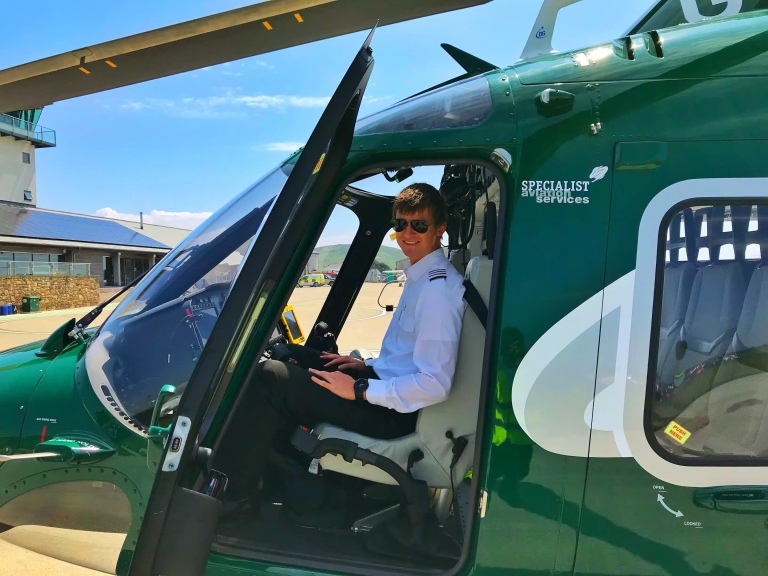 The MCC was a fulltime course that took 2 weeks. It was conducted in a full motion 737 Sim and funnily enough I was the only helicopter pilot inbetween a dozen integrated fixed wing CPL graduates. I really enjoyed it, and even though having to fly an N-1 circling approach in a 737 was a little bit outside my comfort zone – it did bring some memories back from Uni (testing experienced airline captains) and from when my dad took me with him. It was however, also an unexpected reminder why I chose helicopters over fixed wing aircraft. 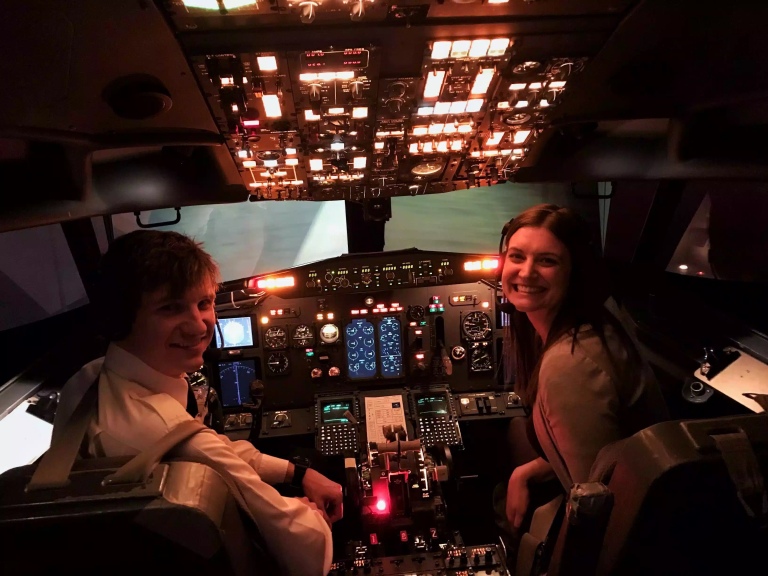 As soon as I received my certificate I hopped into the plane to Sesto Calende – Italy, where the Leonardo Training Facility and factory is located. The course took 6 weeks in total. It started with 2 weeks of ground school; going over all the onboard systems, autopilot, cockpit layout, components, safety features and flight controls. Soon after that we were training in an FTD (non motion sim) and soon after that the Level D (motion) sim to start the practical training. After a total of 30 hours multicrew VFR and IFR flight training in the sim and doing 2 hours in the real aircraft, I had received my AW169 type rating. It was an unforgettable time and I still feel very grateful for having had the opportunity to experience it. Our instructors were very competent and the overall atmosphere was great.

I know it sounds cliche but for me it really did (and still does) feel like a dream coming true. Flying the AW169 feels amazing and it is a lot of fun to fly. It’s quite the step from flying a 700 kg helicopter to now a 4800 kg helicopter, but everything about it really intrigues me and I am getting more used to it day after day.

When I returned to the UK to do my company flight training I spent a few months in Land’s End to fly passengers to and from the Scilly Isles as a co-pilot, followed by spending time in the MD902 as a technical crew member to get more used to the typical HEMS operation. It took a little bit of time to get used to the speed at which everything goes. As an instructor I was so used to prepping a briefing (sometimes even the day before), knowing in advance what was going to be flown, fly it for about an hour, come back, debrief and then get ready for the next “known” exercise. With HEMS, after the crew is briefed and the aircraft is ready to go, waiting outside, you go from doing some reading at base to flying an airspace crossing 5 minutes later on the way to a patient in need of help, it happens quite quickly.

I am now fully qualified as a co-pilot for HEMS, NVIS, IFR and multicrew flying and I honestly sometimes still can’t believe it. The long term plan was always to end up in HEMS, but to get this opportunity straight after my flight instructor job was something I was not expecting a few years ago. The team is great, I feel super grateful and enjoy every single day of the job.

Which brings me to the next bit: my blog. I am not going to blog about my job as a HEMS pilot. This is for 1 very obvious reason: it’s not appropriate nor professional. The operation involves loads of people, variables and flying in combination with medical emergencies. The last thing I want to do is get myself or others distracted or compromise people’s privacy or company confidentiality. This is why I have decided to transform my blog into something more detailed: helicopter theory lessons.

I loved my job as a flight instructor and do miss the teaching and helping people further their careers, this is also why I started my blog in the first place back in 2014: to help others take the right steps in their helicopter careers and to provide information otherwise not easy to access. I am very excited to talk about a lot of topics that I’ve already selected. All that is left for me to do is teach myself how to use the software that I will use to draw and animate / explain things, plus some proper editing software.

A lot of you have been following me week after week. My blog has seen a lot of traffic from so many different countries, from PPL students to experienced captains who are just curious about the road blocks. It doesn’t stop there though as everyone has also been asking me for more explanations about helicopter theory. I noticed that it isn’t just ATPL students who are interested in understanding how things work with regards to the theory behind flying. It is also very much the experienced commercial pilots who, on a day to day basis, are not really exposed to things like autorotations, aerodynamics, design principles and other ’hows’.

My goal is to cover genuinely interesting topics in the future, that won’t just intrigue the typical student, but also the experienced pilot who either likes a brushup on a certain topic, or will be intrigued acquiring some info that he would otherwise not have known about how it all works. I believe that my background in Aerospace Engineering together with my enthusiasm for this industry will be a good combination for some interesting videos. Stay tuned!

One thought on “The Future of My Blog”

Recent Articles: Pilots Who Ask Why

How Exactly Does the NOTAR System Work and What are the Coanda and Magnus Effects?

Tail rotor systems are one of the most crucial components onboard a helicopter. While pilots can deal with tail rotor emergencies, there are variables that could be extremely hard to deal with and manage. This is why the structural design and manufacturing of tail rotor systems is taken extremely seriously amongst aircraft manufacturers. Many implementations […]

How do you Pick the Right Flight School for Your Goals and Circumstances?

One of the most talked about (and requested) topics for aspiring student pilots: how do I navigate this sea of training schools, options, advertisements, promises, and costs? Do I pick a modular course, or integrated? Should I expect to be a flight instructor first or not? What about the instrument rating (IR)? How many hours […]

The Aerodynamics of Vortex Ring State and the Vuichard Recovery Technique

Vortex Ring State (VRS) is one of the most hazardous conditions a helicopter pilot can be in. While it’s part of all the helicopter pilot training syllabuses in the world, it is still present in (fatal) accident reports and discussed widely in the helicopter industry. Lots of pilots have requested for it to be covered […]

What are the Most Crucial Personality Traits & Skills for Professional Pilots?

5 Reasons Virtual Reality Will be the Future of Flight Simulators

We haven’t quite entered the times presented in ‘Ready Player One’ just yet, but it’s actually slowly getting there. Virtual Reality (VR) technology is getting cheaper and more advanced every year since companies like Oculus and Valve made it more mainstream, resulting in companies like Apple, Microsoft, and Google all pouring resources into research and […]